Just before the 19-year-old heiress leaves for a summer holiday on Mackinac Island with her Aunt Christena, she’s hired to stop in a little town along the way and make inquiries. Did Agnes Olcott really die there of cholera? Or were there darker doings in Dillmont? Mary’s mentor, Detective Sauer, thinks it’s merely a case of bad luck for the dead woman. But Mrs. Olcott’s daughter suspects her detested stepfather played a hand in her mother’s untimely death.

With the reluctant help of her aunt and her dear friend Edmond Roy, the young detective struggles to reveal the true fate of Agnes Olcott. As she digs ever deeper, the enemy Mary provokes could spell disaster for her and the people she loves. But in the end, it’s the only way to banish a daughter’s doubt.

“I  really don’t want to give anything away but if you like historical mysteries, you will love this story. No motor cars, no cell phones, just horse, buggies, trains, and the brains God gave her Mary does everything she can to expel ‘A Daughter’s Doubt’ and it was a perfect escape for me!” — Escape with Dollycas

“In the spirit of Nancy Drew and the Corner House Girls… Likable Mary is a bright, inquisitive young woman, although she’s sometimes too headstrong. It’s an old-fashioned series in the best sense of the word. Audry captures the turn-of-the-century period perfectly, when young women like Mary were trying to burst out of Victorian expectations to become their own person.” —Mary Ann Grossmann, St. Paul Pioneer Press

“I love great historical fiction and this book delivers. From the descriptions of the tableaux vivants in the beginning of the book to details of travel, dress, and healthcare, this book is written with a deep understanding of the time period that pulls the reader in. You can feel and commiserate with Mary and her confusion of how she fits into her society, when what she wants seems to be at odds.” — I Read What You Write Blog

“This historical cozy mystery was an enjoyable read that I didn’t want to put down until Mary found out ‘whodunit’… This is a series I want to continue reading, and I hope we have many more Mary MacDougall mysteries to look forward to.” —Brooke Blogs

The new King Harald canine cozy mystery is now available as an e-book and a print-on-demand paperback, from all the usual outlets. Here’s what happens in New Bergen this time around:

As the leaves begin to change color in New Bergen, Andy Skyberg wants to turn his full attention to his sister’s new café and art gallery—and to the beautiful Finnish architect who’s managing the project.

But the good-natured, go-to guy can’t seem to catch a moment’s peace.

His next-door neighbors—two elderly sisters—want him to fend off a pushy historian who thinks they had a scandalous past. His parents enlist him to entertain a narcissistic, boring couple they would like to ditch. And his ever-scheming Aunt Bev tricks Andy into seeking an improbable new gig that could land him in the hot seat.

Even Andy’s big ol’ mutt King Harald has a kennel full of trouble in store for him, beginning with a pilfered thousand-dollar bill and a naughty garden gnome. Before long, New Bergen’s favorite crime-sniffing pooch finds even more deep doo-doo to toss his boss into.

Havoc and hilarity ensue, as Andy and his happy hound get to the bottom of King Harald’s Heist.

King Harald’s Heist is available from all the usual e-book suspects online. The paperback can be ordered from Amazon or any merchant who sells print-on-demand books. And paperback copies are available at two leading Twin Cities bookstores—Uncle Edgar’s in Minneapolis and Common Good Books in St. Paul.

“I love this series, both because I’m crazy fond of the adorable protagonist, that “big mutt” HARALD, but also due to the author’s noted talent in uncovering character. In addition to the ongoing series characters, in each book the author introduces new background characters who of course come trailing their own engrossing plots and mysteries.”
—Mallory Heart Reviews

“It’s really quite refreshing to have this male point of view into the world of cozy mysteries. I’m not putting the cozy MC heroines down, by any stretch of the imagination, just letting them know it’s ok to make some room on the shelf for the guys.”
—Back Porchervations 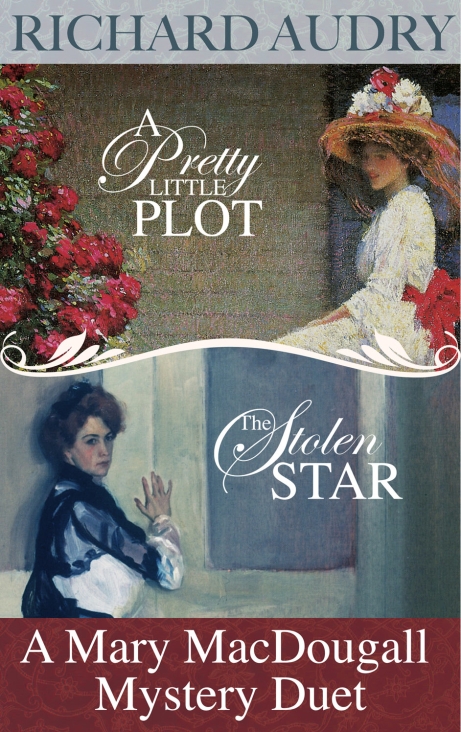 Up until now my two Mary MacDougall mystery novellas were only available as e-books, leaving out folks who are not fond of e-book readers. Well, now readers who prefer their books not on an LCD screen can read the two historical mysteries on good old-fashioned paper. It available from Amazon, Barnes & Noble and any other book retailer who sells print-on-demand books.

“Being short novellas does not take anything away from either of these stories… Mary is a character I want to get to know better and one I will remember for a long time.” —Escape with Dollycas

Mary MacDougall is back for her second mystery, The Stolen Star. The new novella is available from most major e-book sellers, including Amazon and Barnes & Noble.

Neophyte sleuth Mary MacDougall is enjoying the holiday season with a flurry of activities—including the 1901 Gala Christmas Musicale, starring opera diva Josie Borrell. But when the celebrated sapphire that Josie wears for her performance goes missing, Mary is drawn into the hunt for the purloined gem.

Did a master thief swoop into town to nick the Star of the North? Was it the lovelorn maid? The manager with money troubles? The foul-tempered chef? The pianist with the scandalous past? Or was it the famous singer herself?

In the middle of all this tumult Mary has to cope with the unexpected appearance of the only man who has ever aroused her longing—and the lovely woman who seems to have captivated him.

As she unpeels the layers of deceit and duplicity behind the Star’s disappearance, Mary juggles affairs of the head and of the heart, driving her practically mad. In the end, the matter of the stolen Star comes down to the simplest of clues. While the matter of the man she loves couldn’t possibly be more complex.

“In the spirit of Nancy Drew and the Corner House Girls… Likable Mary is a bright, inquisitive young woman, although she’s sometimes too headstrong. It’s an old-fashioned series in the best sense of the word. Audry captures the turn-of-the-century period perfectly, when young women like Mary were trying to burst out of Victorian expectations to become their own person.” —Mary Ann Grossmann, St. Paul Pioneer Press

Richard Audry is back  with a totally new mystery series. Welcome Mary MacDougall, the heiress and wannabe sleuth, in her first adventure: A Pretty Little Plot. Here’s what happens in this brand-new historical novella. The book is available from most major e-book sellers, including Amazon and Barnes & Noble.

For 18-year-old Mary MacDougall, the highlight of her 1901 summer vacation is the painting class taught by the darkly handsome Edmond Roy. But when Mr. Roy is accused of kidnapping two of his own pupils, it falls to Mary to dig up the truth.

Is Mr. Roy merely an innocent painter of landscapes and still lifes? Or a devilishly clever criminal? Should Mary defend him? Or fear him?

As she feels her way through her very first investigation, Mary not only learns the hidden facts of the case. She discovers the real secrets are those that she finds deep in her own heart. The imperious young heiress is not as immune to feelings of attraction as she thought. Mr. Roy has awakened a longing within her.

Will Mary MacDougall help to exonerate the man? Or condemn him to years in prison?

“The author paints a grand little mystery with his words. He brings history to life with a fresh voice.” —Escape with Dollycas

When springtime arrives in picturesque New Bergen, so do the tourists and antiquers. This year, though, there are some unwelcome visitors. Extortion. Arson. And murder.

After his business tanks and his wife leaves him for a Pilates coach, Andy Skyberg flees the big city for the peace and quiet of his hometown. All he wants is a decent job, a steady girlfriend, a plasma screen TV with a hundred-plus channels, and one loyal dog. But fate has something else in store for Andy, when his big mutt King Harald starts sniffing out crime.

It’s clear that someone has it in for the town’s New Age retailer, Trudi Bock. And it’s also clear that Trudi wants to rekindle the steamy romance she and Andy enjoyed back in college. Andy has to fend her off, while placating his fiery girlfriend, Deputy Sheriff Cass Conlin.

Meanwhile, Harald keeps digging up more mayhem. And it falls to Andy to channel his inner sleuth and make sense of it all.

And you have all the makings for The Karma of King Harald.

“Anyone who loves dogs will love this series…”
—3 Partners in Shopping; Nana, Mommy, &; Sissy too!

“I am completely enamored of good natured King Harald. Audry’s descriptions of this wonderful dog are spot on giving us deep characterization as well as meaningful views and commentary. I certainly wouldn’t mind having some ebelskivers and a Biberschwanz Pilsner with Andy and sharing some Slim Jims with King Harald!”
—Cozy Up With Kathy

Carole Nelson Douglas, author of the Midnight Louie series, says:
“Lake Wobegon fans, rush to a new canine cozy mystery with a fresh small town setting! New Bergen is packed with tourists and Nordic crafts, characters and food, not to mention murders. Andy Skyberg, returning native, is drawn into solving the crimes, but his large loveable mutt, King Harald, is the expert at sniffing out murders. This mystery is amusing and charming, with complex passions and plot at its core.”
Cozy Mystery Book Reviews says:
“The Karma of King Harald was a really fun, light hearted cozy mystery. For fans of canines in cozy mysteries this is definitely one you won’t want to miss.”